I am finally adding this classic slow cooker pot roast recipe to my growing collection of roast recipes, which my family and friends love:

You just dump everything in a crockpot and let everything cook for a few hours. The meat simply melts in your mouth and this roast is so tender that it easily falls apart.

My favorite part is that you don’t need to make a separate gravy. The cream of mushroom soup and juices of the roast combine together to create a delicious gravy.

This is the most moist slow cooker roast beef with potatoes and carrots!

Enjoy it with my One Pot Creamy Mashed Potatoes.

This is probably one of the most popular versions of pot roast. Some people have modified it to their tastes by using different soup mixes for a unique flavor profile. Also, if you make your own homemade soup mixes, you can easily use that in this recipe.

If you want to add wine, use only 1 can cream of mushroom soup and 1/2 cup red wine.

If you add vegetables like potatoes and carrots in the beginning, they will become very soft by the time your roast is ready. They would still taste great!

However, if you want to prevent vegetables from becoming over-cooked and “mushy,” add them halfway through cooking and they will have the perfect texture! 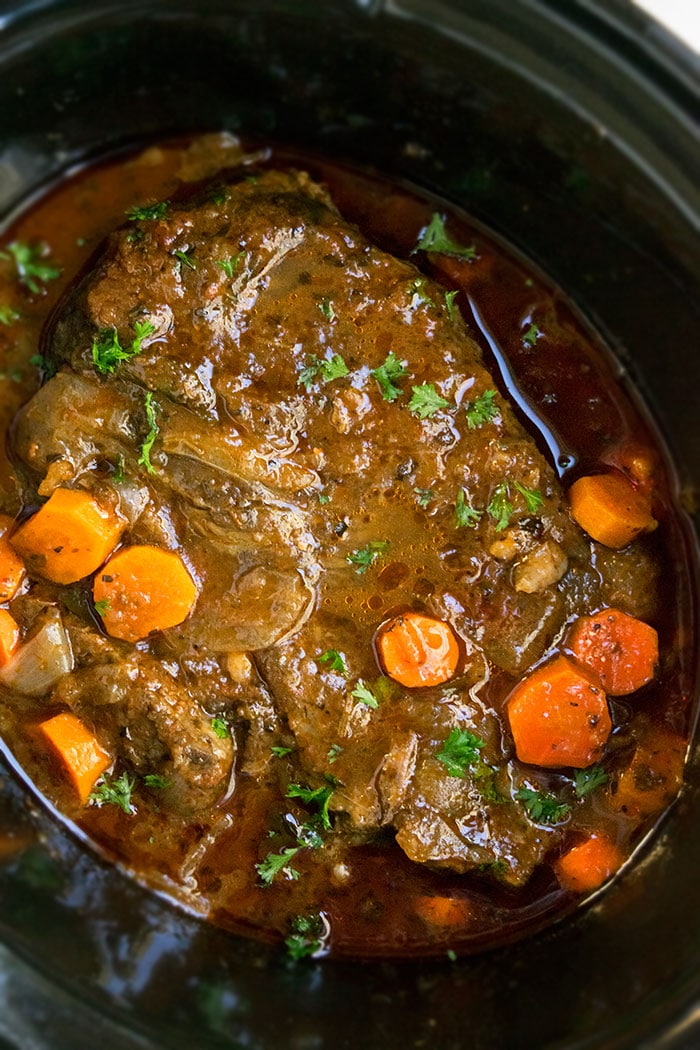 For a 2.5 lb. roast, it takes 6 to 8 hours on low. I used a bigger roast that was about 4 pounds and cooked on low for 8 hours.  You can also make this simple slow cooker pot roast on high for 5 hours but it’s not going to be as tender, as when it’s cooked low and slow.

Do you have to brown a roast before putting it in the crockpot?

It’s highly recommended and my mom does it because it enhances the flavor of the roast.

Do you put water in a crock pot to cook a roast?

No, don’t do it because that will make the gravy very thin. The only liquid you are adding in this recipe is cream of mushroom soup. That’s it! 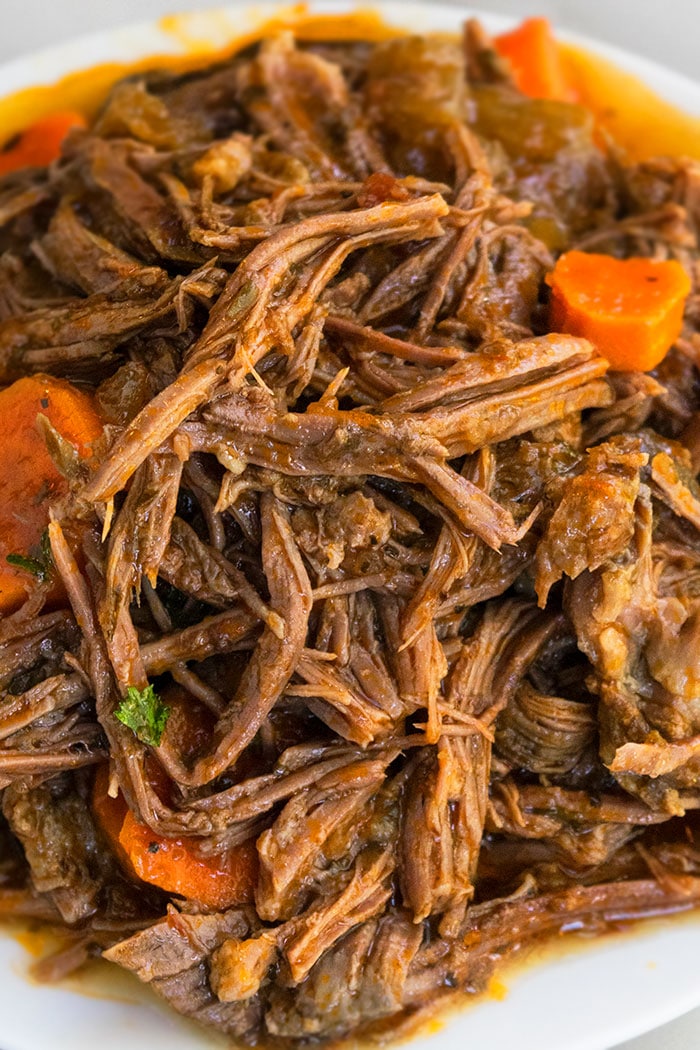 In this recipe, you will end up with an amazing gravy that develops from the cream of mushroom soup and juices of the roast mixing together.

However, if you think it’s still too thin, use a turkey baster to remove all the liquid into a saucepan and cook of medium heat to reduce it further and thicken it.

In other recipes that use broth and water, there is usually a lot of leftover liquid, which you will need to remove and cook it in a saucepan, along with some flour to thicken it.

Other cuts of beef can be used but I think boneless chuck is best.

-For an enhanced flavor, my mom does this: Heat oil in a nonstick pan over medium-high heat. Add the chuck roast and season one side with salt and pepper. Sear it until golden brown. Then, flip it over and season the other side with salt and pepper. Sear it. Sear and brown the sides of the roast too. Then, place it in the slow cooker and follow the rest of the steps, as explained below in the recipe card.

-Use low sodium cream of mushroom soup so as to prevent the roast from becoming too salty.

-Adjust the amount of seasonings, based on your preference.

-NO additional liquid or broth is required in this recipe.

-You can add vegetables of your choice. Typically, carrots, celery, onion and potatoes are added but if you are not fond of vegetables, you can omit them entirely. I only used carrots and onions this time.

-I really don’t think there is a very good substitute for cream of mushroom soup but some people have tried cream of celery soup and said it wasn’t bad.