Quick and easy Thanksgiving turkey stuffing recipe, made with simple ingredients in one pot on stovetop. This 30 minute side dish is loaded with butter and herbs.

This is the ultimate Thanksgiving turkey stuffing recipe and guide. It’s moist, tender but firm and loaded with butter and herbs. This recipe can also be easily be adjusted, based to your preference. You can serve it on the side or enjoy it stuffed in a turkey. You must also check out these other classic Thanksgiving sides One Pot Homemade Cranberry Sauce and  One Pot Creamy Mashed Potatoes and this One Pot Homemade Brown Gravy

This is the best turkey stuffing recipe ever with the perfect texture!

This one pot easy turkey stuffing is ready in less than 30 minutes! 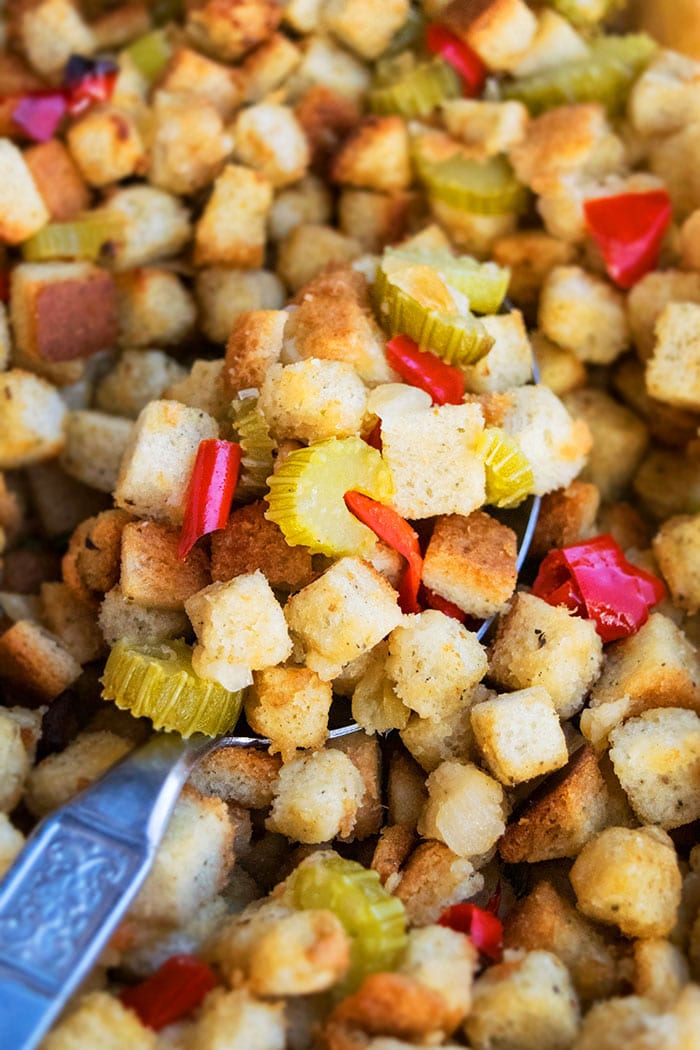 What is the best stuffing for turkey?

My recipe below is the best!  It’s classic and traditional and loaded with herbs, butter, onion and celery. It’s moist but still firm.

How to stuff a turkey?

Spoon the prepared stuffing mixture inside the turkey’s cavity. DON’T tightly pack it in because that will make the too soggy. The rule of thumb is you need about 3/4 cups of stuffing per 1 pound of turkey.

When to stuff turkey?

This should be done just prior to baking the turkey or else bacteria can grow.

Is it safe to stuff turkey? Stuffed turkey vs. Unstuffed Turkey

There is a huge debate surrounding this issue. My family always served this bread stuffing on the side but I did some research and found that if you stuff a turkey with stuffing, you have to use a long thermometer to ensure that the center of the stuffing cooks to 165 degrees. Only at that temperature, the stuffing is considered safe for consumption. Check out the USDA’s detailed safety guidelines for stuffing turkey.

That being said, I don’t like stuffing cooked inside a turkey because it becomes very soft and moist and almost soggy. I prefer my stuffing a little firmer and cooking on the side on stovetop ensures that it’s not too soft.

What spices do you put in thanksgiving stuffing?

Instead of all these herbs, you can use a few teaspoons of Italian spice mix or poultry seasoning mix.

What do you put inside the turkey?

Some people add the prepared stuffing inside the turkey. Other people add a combination of oranges, lemons, onions and fresh herbs instead of the stuffing. 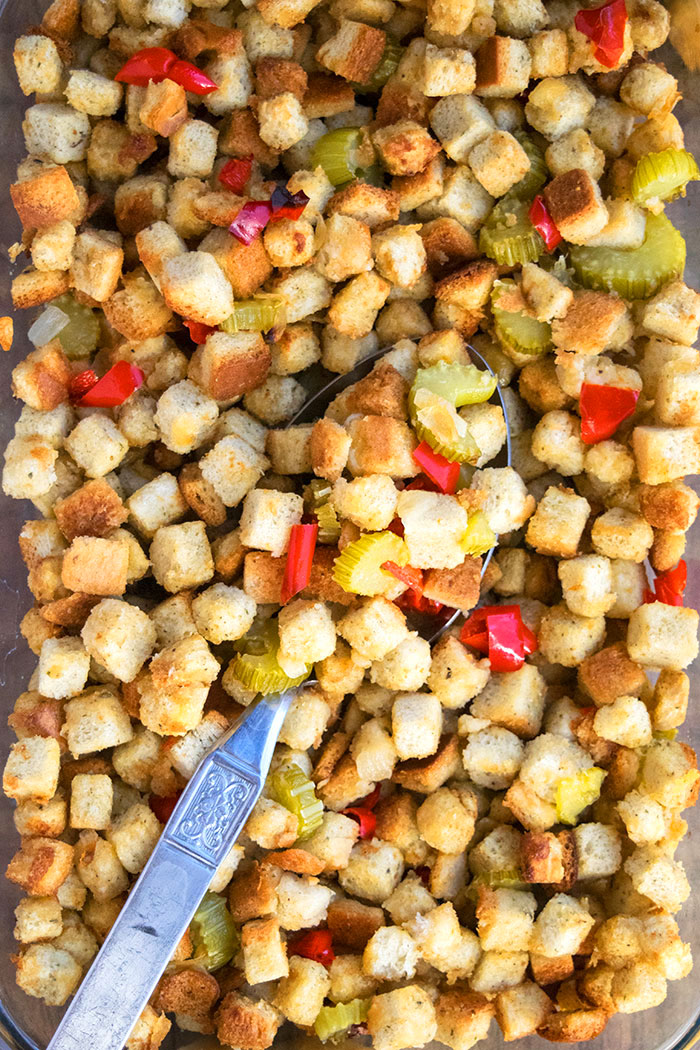 You have to use dry bread because that allows it to absorb all the flavors from the spiced broth.

Any type of the following breads can be used:

Use gluten free bread cubes or croutons. The rest of the recipe is exactly the same. 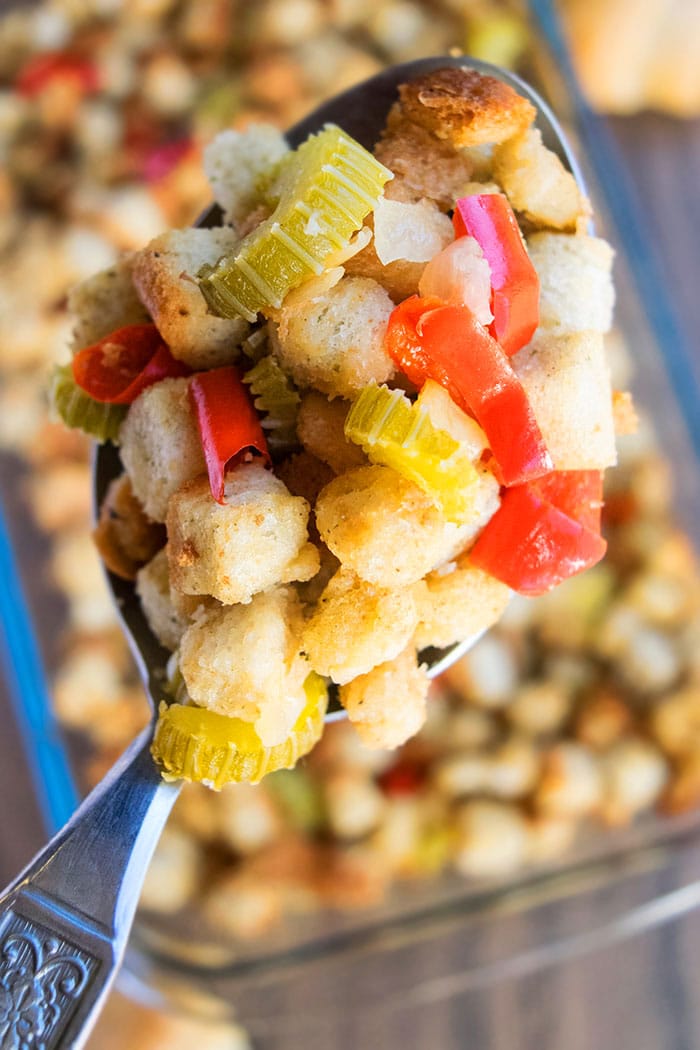 How to make dried bread cubes?

I usually buy them because it’s quick, easy, cheap and a time-saver. However, they can be made at home too.

Add some red chili flakes and paprika. You can also add some spicy sausage.

Use whatever sausage you like. Cook it with the vegetables. Then, add herbs and broth.  Mix in the dried bread and you are done.

This is an awesome way to use up leftover stuffing. It helps to bind the meatballs together like glue and also adds flavor from all the spices and herbs that were added in the stuffing.

This is another great way to use up leftover stuffing. It helps to bind the meatloaf together like glue and also adds flavor.

Use leftovers in a casserole the next day with shredded turkey, roasted vegetables, mashed potatoes and lots of cheese.

You can use this stuffing for roasted chicken too. It works great with Italian chicken and Greek chicken. Once again, I prefer serving the stuffing on the side rather than putting it inside the chicken but it’s a personal choice.

Use this recipe for Christmas turkey stuffing too! 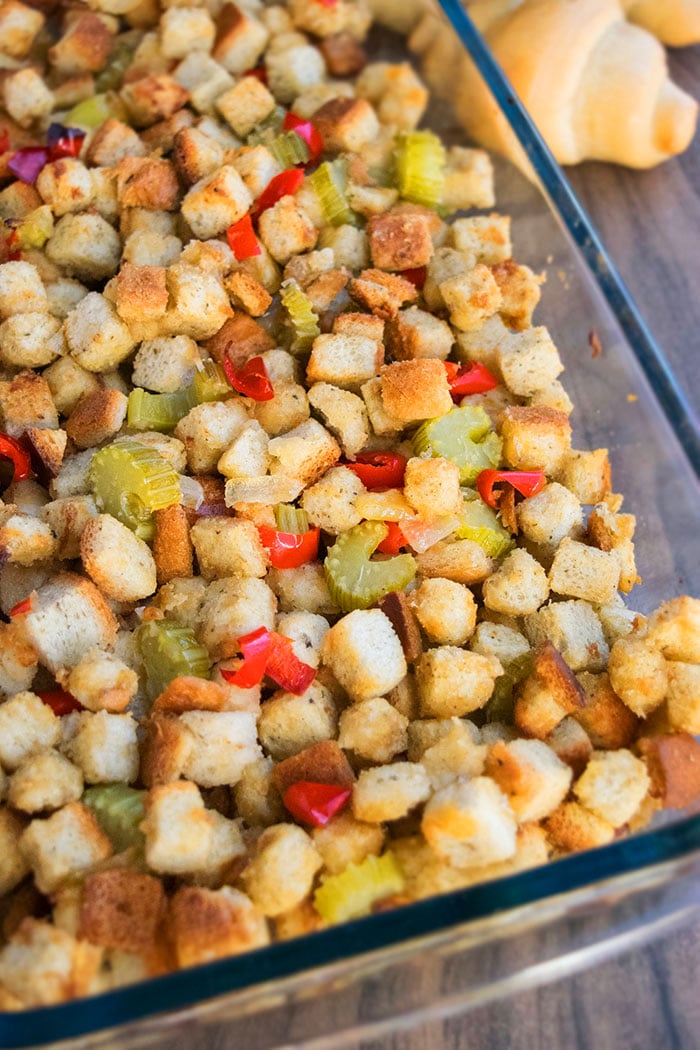 Other One Pot Thanksgiving Sides/ Side Dishes 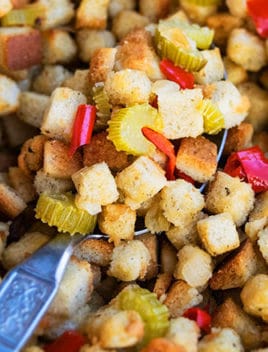