This soup is the best! The savory flavors of the bacon and ham, are matched in decadence by the creamy corn and potatoes. This Cream of Broccoli Soup(One Pot) and Creamy Tortellini Soup (Crockpot) will also satisfy your desire for warm comforting soups this season.

How To Make Instant Pot Corn Chowder Recipe From Scratch?

What Sides to Serve With Easy Potato Corn Chowder Soup With Bacon?

Pair this soup with foods you can dip into it such as bread:

This soup is delicious paired with sandwiches as well. Try the following:

Salad is a classic choice with any soup. Serve with a simple green salad or one of these robust salads:

It is typically a thick, rich, cream-based soup containing corn, onions, potatoes, and/or fish and clams.

Variations For Ham and Corn Chowder

Vegetarian/ Vegan corn chowder– Eliminate the bacon and ham, and use vegetable broth in place of the chicken broth. Also, use vegan butter, and coconut milk.

Add ground beef– This makes an even heartier soup.

Add turkey– Use leftover Turkey from a previous meal, or even add ground turkey for a leaner protein option than beef.

Try other seasonings– Such as Mexican or Cajun for a flavor twist.

Make it creamy– Add whole milk, heavy cream, half and half, or coconut milk. You can also mix and match to your preference.

Tips And Techniques For Corn and Potato Chowder

How to thicken chowder? Add more cornstarch slurry, or cook uncovered on “saute” mode until excess liquid evaporates and reaches your desired consistency.

Use nonstick pot– Because it prevents sticking and burning, making clean-up easier.

Adjust amount of seasonings– Add more or less of whatever seasonings you like or dislike.

Use low sodium broth– Because it prevents the soup from becoming too salty.

Use full fat ingredients– Because that makes the creamiest and richest soup.

Refrigerate– In a sealed container for up to 3 days.

Freeze– I do not recommend freezing because of the dairy and potatoes. The potatoes will be very mushy, and the dairy will separate upon thawing.

Reheat– In the microwave or on the stovetop. 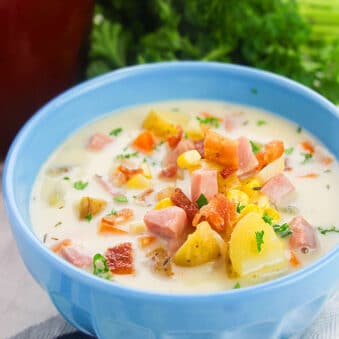